Tackling Rising Drug Costs in the US: Is ERP an Option?

Rising drug prices in the US are hot topic. Inbeeo takes a look at the recent drug pricing proposal by the Democrats suggesting the use of ERP.

Rising prices and overall cost of pharmaceuticals is a global trend and, quite simply, it makes sense considering we are now able to modify a person’s genes to treat disease. With this great power comes great…prices. However, questions surrounding to what extent such drug price increases are justified are becoming more frequent, particularly in the US where drug pricing is much less regulated than in other countries. Could the implementation of External Reference Pricing (ERP) lead to significant savings across the pond?

The External Reference Pricing Battle-line are Being Set

The Institute for Clinical and Economic Review (ICER) has released its first annual Unsupported Price Increase report, which is likely to further fuel the drug pricing debate. After reviewing nine US prescription drugs which had substantial price hikes, the report suggested that for seven out of nine drugs there is no new clinical evidence to support these increases. In the US, the problem with high treatment costs is compounded by the disparity between these prices in the country compared with other developed nations. As drug pricing is very much a political issue, it follows that as the US 2020 elections approach, the two words on every politicians’ lips are “healthcare” and “costs”. The fight between the Republicans and Democrats to prove their commitment to tackling prescription drug costs has intensified, with the Democrats releasing their final bill proposal on the topic.

Ultimately, if this proposal was passed it would give the Secretary of Health and Human Services the capacity to negotiate prices of the top 250 Medicare Part B and D drugs which present the greatest total cost to the US healthcare system and do not have generic competition. According to the plan, an upper limit for a drug price would be based on “no more than 1.2 times the volume-weighted average of the price of six countries (Australia, Canada, France, Germany, Japan and the United Kingdom)”. The price determined by the negotiation process would be available to all beneficiaries – not just beneficiaries of Medicare, which would likely have significant nationwide ramifications.

What would the Actual Impact of ERP be on Drug Prices in the US?

Since the details of the proposed external reference pricing (ERP) model were provided in the proposal, at Inbeeo we thought it would be interesting to put together a few back-of-the-envelope calculations to test the potential effectiveness of this approach in controlling US drug prices.

Five drugs which cause significant costs to Medicare (and therefore likely the whole US healthcare system) were selected from the Part B and D Drug ‘spending dashboard’. These drugs were selected based on the total spending in 2017 by Medicare and the availability of pricing data (plus partly random choice). A potential maximum ERP price for each drug, based on 1.2 times the volume-weighted average, from the six referenced countries was then calculated. We used publicly available pricing data (see end of article of specific sources) for each country – a mixture of list prices and manufacturer prices, therefore note that the potential ERP is an estimate. The volume-weighted average was based on the relative population sizes of each country. This calculated ERP price was then compared with the US FSS price to get a rough idea of the potential savings that could be made.

FSS prices, which are discounted prices negotiated by the Veterans Association and are available to all direct federal purchasers, are a lower and arguably more realistic benchmark for drug prices compared to list prices or wholesale acquisition costs (WAC) in the US. A report by Mattingly et al. which estimated US drug costs for select drugs based on manufacturer drug price transparency reports, suggested there can be substantial difference between the WAC and FSS prices, with rebates as high as 80-90% in some cases. We used FSS prices in our analysis to see whether referencing external prices could further lower the FSS price benchmark – or maybe the administration would be better off pursuing internal reference pricing?

Price -Cuts Could be Steep, but not in all Cases 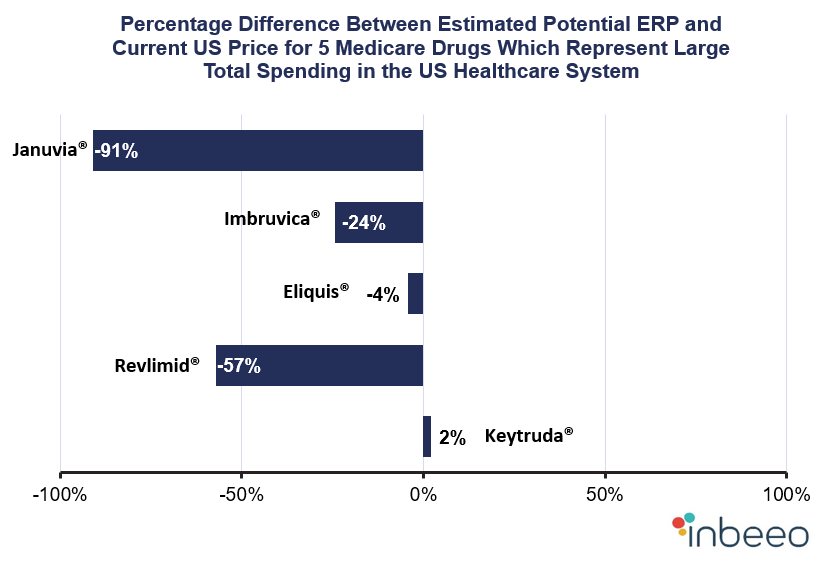 The analysis demonstrated that for four out of the five prescription drugs the potential maximum ERP was lower than the current US FSS price. On average, the potential ERP was 35% lower than the FSS price, suggesting that reference pricing could be effective at driving down prices. The range of percentage differences was broad, with the highest difference observed for Januvia®, at -91%, and the lowest for Keytruda®, at 2%. Interestingly, estimated ERP prices were lower than current prices for both high-cost drugs, such as Revlimid® (57% difference), and cheaper drugs like Eliquis® (4% difference). Keytruda®, however, was the exception to the trend, with the estimated reference price 2% higher than the current US FSS price suggesting that ERP may not be an effective price control tool for some medicines.

ERP Could Reduce Overall Costs of Drugs by Billions 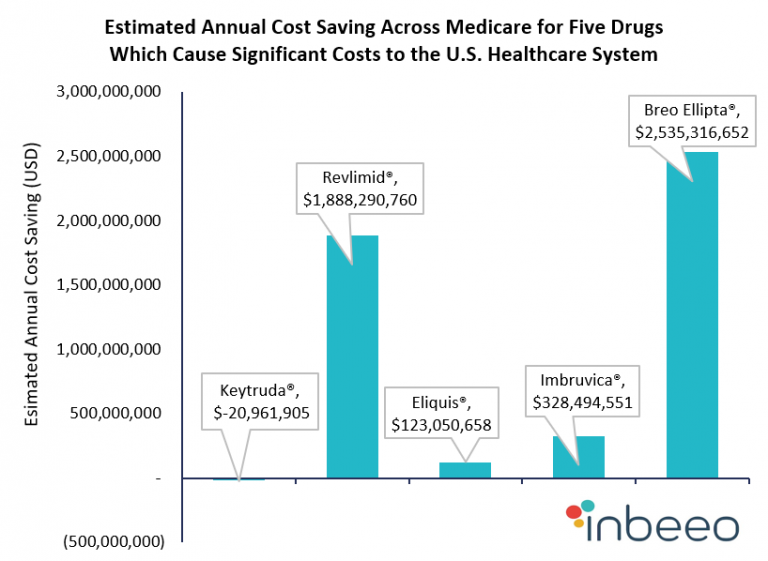 Translating these percentages into overall cost savings, we can see that certain drugs have the capacity to save Medicare several billions of dollars per year. For Revlimid®, a potential cost saving per year of almost USD 1.9 billion highlights the tremendous savings which could be made by Medicare as a result of implementing ERP in the US. Lower cost drugs, such as Januvia®, could also bring huge overall cost savings (an estimated USD 2.5 billion) given large prescribed patient populations.

But is ERP the Best Approach for Cost and Pricing Control?

ERP could be an effective cost-control tool for drugs causing some of the biggest dints in healthcare budgets, but is it the right approach to tackle the drug cost issue? The basket countries proposed by the Democrats to utilize in ERP have been criticized for their lack of comparability in terms of relative market orientation. Also, how well the model works to control individual drug prices is important, but the wider implications of this for the industry and across countries must be considered. Market launch delays, price convergence and price instability have been cited in the literature as potentially harmful outcomes of ERP on patient access. The other concern is that cutting pharmaceutical prices may decrease manufacturer revenues, which could lead to reduced innovation and development of new pharmaceuticals.

Overall, the Democrats proposal to use ERP to contain prescription drug costs in the US may be an effective solution for both high and low-cost therapies. Although, the degree to which ERP reduces individual drug prices is likely to vary on a case-by-case basis. Our analysis demonstrated that estimated maximum ERP prices for four out of five Medicare Part B and D drugs were considerably lower than current US FSS prices, with an average price difference of 35%. Patients who currently face excessive patient co-pays for prescriptions could be set to benefit from reduced prices for certain drugs, which also would fulfil politicians’ intentions to get voters on side. However, there are gaps in the evidence surrounding the overall quantifiable impact of ERP on health policy objectives. If the bill proposal in question is to be approved, I think a closer look at the impact of ERP beyond its effect on drug prices would be essential to assess the risk of compromising patient access in the long-term.

Medicare Part D Beneficiary more than $10,000 Year – Inbeeo investigates how much could the maximum financial burden for a patient be in one year and for one single medicine within Medicare Part D?

4 Take-Away Messages From The Zolgensma® Pricing Storm – We review the $2.15 million Zolgensma price tag and though analysis of treatment costs for sever chronic disease try to see if the backlash around this price tag was was a storm in a teacup or a tropical cyclone?