Was the reaction to the $2.15m Zolgensma list price a tropical cyclone or more of a storm in a teacup?

I’m sure by now everyone has seen the headlines.

The recent announcement by Novartis of the list price of its new gene therapy for Spinal Muscular Atrophy, Zolgensma®, has sparked a plethora of heated reactions over the past few weeks. $2.15 million was the figure. The story has definitely dragged the pricing and affordability debate back to the fore. One month later, it is time to look back at the story and try to answer one simple question – was this a storm in a teacup or a tropical cyclone?

Here are my 4 take-away messages from this story.

1) Time is of the Essence

The sticker-shock that stemmed from the Zolgensma® list price reveal has eclipsed the question that really matters – the question of time. A 1, 2, 3 or 10 million investment doesn’t mean much to me if I have zero information regarding the timespan of my expected return. We have to state the obvious here that on the one hand, we have a gene therapy that is a one-time treatment requiring a considerable upfront investment, and on the other hand, we have a host of chronic therapies that require smaller investments spread over a period of time. Taken separately, those chronic treatments might seem more affordable, but cumulated over time, they can become far more expensive than Zolgensma®’s single shot. To me, the question of

‘for how long should we cumulate those chronic treatment costs to make a fair comparison between Zolgensma® and the current standard of care?’

trumps the question of the price tag. Novartis has opted for 10 years. In their press release, they claimed that the set price was “50% below 10-year treatment costs for genetic pediatric ultra-rare diseases (estimated at USD 4.4 million to USD 5.7 million)“. A bit of a cryptic claim in the absence of information relating to the products included in the analysis. So we mined Inbeeo’s pricing database to extract a sample of 10 products that might actually meet the criteria of comparability, including Biogen’s Spinraza®, as the only other disease-modifying therapy approved in SMA. 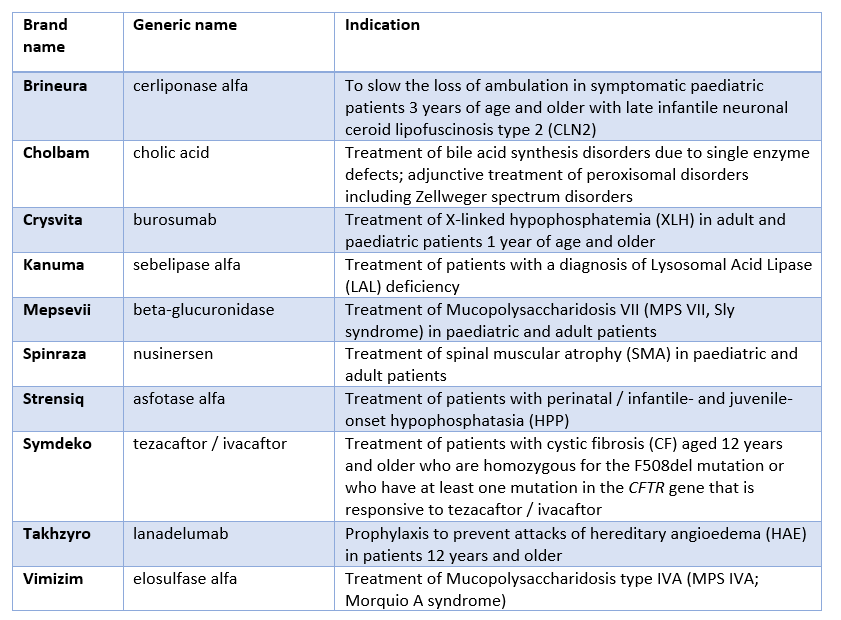 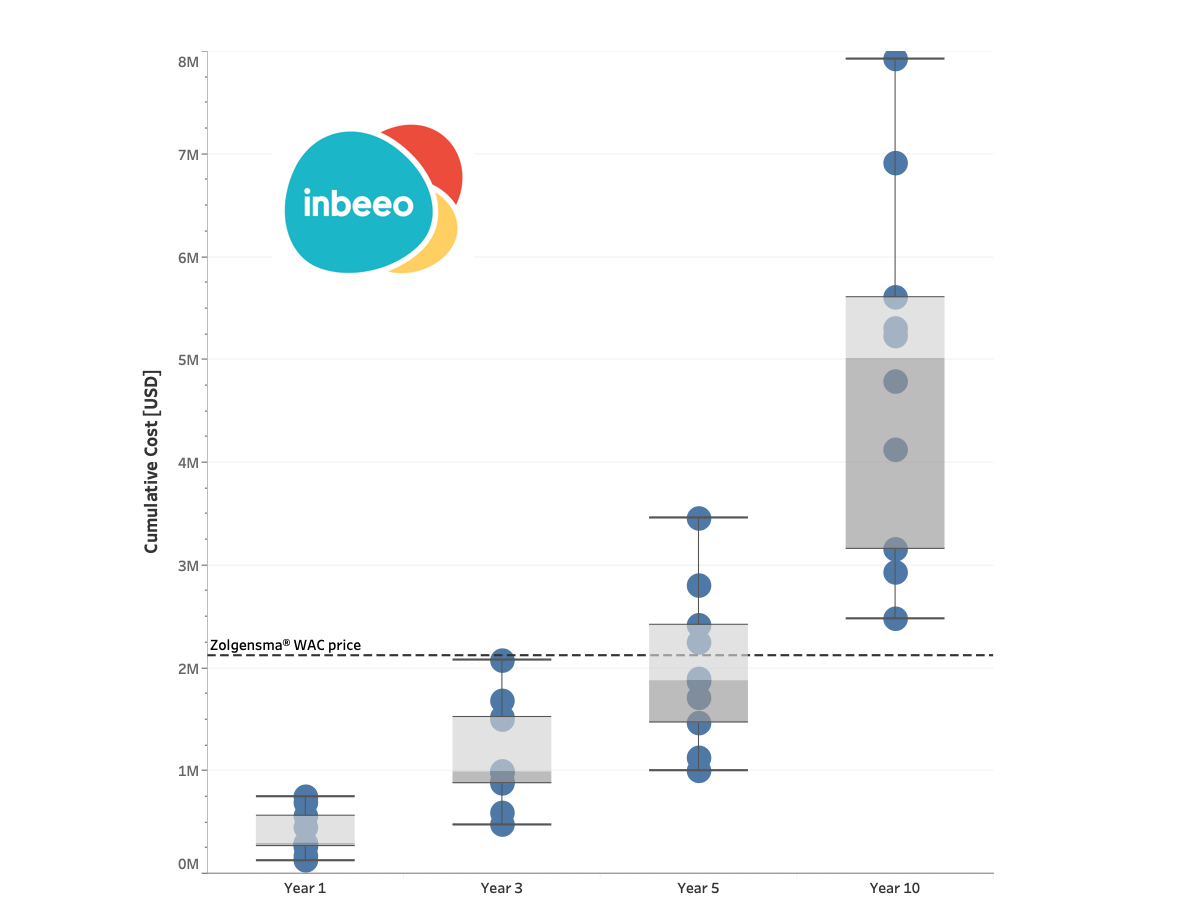 Broadly speaking, our analysis confirms Novartis’s claim of a 50% discount vs. other treatment costs for genetic pediatric rare diseases over 10 years. However, it also reveals that the variability of – and thus the uncertainty around – treatment costs grows considerably after 10 years. A 5-year comparison seems more reasonable, with Zolgensma®’s acquisition price being close to the median cost in our sample. Anything shorter than that puts Zolgensma® under a less favorable light. This is why time is of the essence – a gene therapy price tag is only relevant in the context of how durable will its benefit for the patient be.

The question of the considerable upfront investment that will bring benefits over time is not a trivial one. In business, it is called ‘cash flow management’, and there are companies going bankrupt every day from doing it poorly.

Novartis has somewhat anticipated the issue by announcing the possibility to fund the product by installments. But installments are a mere payment convenience and payers will need more reassurance before making the decision to fund Zolgensma®. Novartis anticipated that too and announced they were in advanced discussions with multiple payers to design outcomes-based agreements. But with a thin evidence package, this promises to be quite the Herculean work. Insurers are not known for designing insurance schemes that might actually generate a loss for them – not to mention the cost of opportunity at a time when many more advanced therapies are expected.

3) Pricing Communication is a Thing

Mobile phone networks, energy providers, automakers, gyms, software developers, accounting firms, consultants, and many more have long understood this one key success factor in business: the way you communicate the price of your products is as important as their actual price level.

Paying as little as $5 for a power yoga class sounds like a wiser investment than a $2,000 annual gym membership that includes ‘all-you-can-eat’ classes

and driving around town in the newest German car for $20 a day must be a bargain as compared to cutting a $40,000 check. They are the same product and at the end of the day will cost the customer the same amount of money, but the narrative affects the value perception.  Permanently. This is known as price anchoring, and it is pretty powerful. From the moment you have established a $2.15 million price anchor in the mind of your customers, it is difficult to move away from it.

4) No one is Ready for what’s Coming

With the not-so-great price anchoring, I suggested that Novartis was not fully prepared for the Zolgensma® story. But who is? Surely not payers. Let’s take a look at the dominant pricing frameworks in the US and the EU and try and assess their level of readiness.

In the US, the dominant model remains utilization management via brand tier placement, using negative financial incentives to nudge patients and prescribers towards preferred brands and generics. Co-insurance continues to be on the rise, meaning it becomes customary to charge patients 10%, 20% or more of the final bill. The sums at play with Zolgensma® are of course mind-boggling. And with Pharma companies blaming insurers for not passing the negotiated rebates on to the consumer, you can be sure this issue will not go unnoticed with a treatment like Zolgensma®. Of course, co-pay cards will come in as short-term fixes, but they cannot hide the deficiencies of a system at risk of losing all connection to the reality of value.

In Europe, the dominant framework remains that of the ICER, the incremental cost-effectiveness ratio. It is affected by some well-documented methodological issues, but if I oversimplify them to what are in my view the most acute ones, they are 2-fold. Firstly, the desire to summarize in one universal measure – the QALY – something which is incredibly personal and individual – outcomes related to chronic disease. And secondly, the way time and uncertainty are handled in cost-effectiveness models. Some recent product launches have clearly put those weaknesses in the spotlight, in particular in the orphan drug space. But assessing the lifetime cost-effectiveness of a $2.15 million product based on two single-arm open-label studies of 35 patients combined promises to be quite the challenge. I can only imagine the dramatic effects of the sensitivity analyses when varying the proportion of patients being able to walk or sit thanks to the treatment could take the ICER down from several million to virtually zero.

What does it all Mean?

In a (difficult) attempt to wrap it up, it is clear that this is just the beginning of a story that is unfolding before our eyes, as confirmed by the recent list price disclosure of Zynteglo®, a gene therapy against transfusion-dependent β-thalassemia. Claiming that Zolgensma® is the most expensive treatment in the world is misleading. But claiming that it is ‘expected to save costs to the healthcare system’ in its approval press release is a leap of faith given how little we know about its long-term benefit-risk profile. The only thing which is certain is that pricing frameworks on both sides of the Atlantic need a profound change to be ready for gene and other advanced therapies. And by profound change, I mean a rework from the ground up, not applying band-aids through installments or ICER threshold modulations. With an estimated 10,000 monogenic diseases (WHO), the likes of Zolgensma® and Zynteglo® are prototypes of what payers are truly facing – not a few isolated storms, but an irreversible climate change.

How Payers in the US & Europe are adapting to the ATMP revolution – What are ATMPs exactly? Why all the fuss about these therapies? What impact they are having within EU and US market? Watch Inbeeo’s webinar to find out!

Tackling Rising Drug Costs in the US: Is ERP an Option? –Rising drug prices in the US are hot topic. Inbeeo takes a look at the recent drug pricing proposal by the Democrats suggesting the use of ERP.

Medicare Part D Beneficiary more than $10,000 Year – Inbeeo investigates how much could the maximum financial burden for a patient be in one year and for one single medicine within Medicare Part D?