The Trends of Drug Pricing

Google is powerful. You knew that, I knew that. It really is. But it keeps amazing me when it differentiates a church from a cathedral in my photos while Adobe can’t recognize my face, when it sends me a weather alert before I get on my bicycle while my iPhone thinks I’m driving when I’m on the tube, or when it perfectly filters all the spams from my Gmail account while Outlook keeps trashing emails from clients. In a recent acute distraction episode, I started reading on the hot topic of how investors were increasingly leveraging Google’s analytical tools to make investment decisions. You may have heard for instance that the correlation between the price of bitcoin and google searches of the term was at an astonishing 91%. Enlightened by my discoveries, I tried to bring them back home and started to analyze how search topics such as “pharmaceutical market access”, “drug pricing” or “value-based pricing” were trending.

A Sustained Increase in Drug Pricing Searches in September 2015

The first piece of insight I gained from my exploration was that my line of business was not exactly booming, at least not the bitcoin-like booming. But it was stable. The second – and way more striking fact – was that something happened around September 2015. Something that had had a sustained effect on how many people around the world were genuinely interested in how prescription drugs are being priced. The data looked like a textbook example of a structural change in a time series. Now, when things get really interesting with Google’s analytical tools, is that you can dig deeper into regions, associated search terms, time frames, type of searches e.g. web, news, blogs etc. Trying to put my finger on the event(s) that triggered the shift, my first list of suspects was without surprise:

All of those were interesting, but nothing really coincided with that week of September 20th, 2015 when the surge happened.

Slicing the data like a salami, I zoomed into that week and split the data into search types. And then it was apparent “like the nose in the middle of the face” (you don’t really say that in English, do you?). On Tuesday the 22nd of September the news of Turing Pharmaceuticals jacking up the price of Daraprim by 50x broke globally. However, searches of “Turing Pharmaceuticals” were insignificant. Instead, all the noise was crystallizing around the name of the company’s founder, Martin Shkreli. So how does “Martin Shkreli” search term correlates with “Drug Pricing”? Well, it’s bitcoin-like correlation. 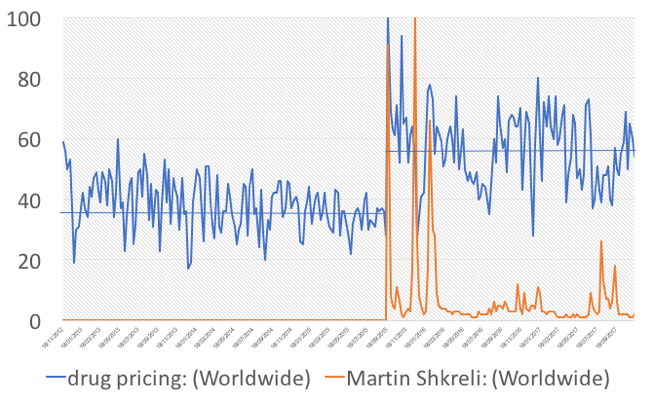 To be complete, the only other search term providing a similar level of correlation was “pharma bro”. If you’re having doubts about one man significantly and durably raising the profile of prescription drug pricing like this (or if you’re a statistician about to add a “you forgot to account for the confounding factors” comment), here is the order of magnitude between him and the other associated search terms. 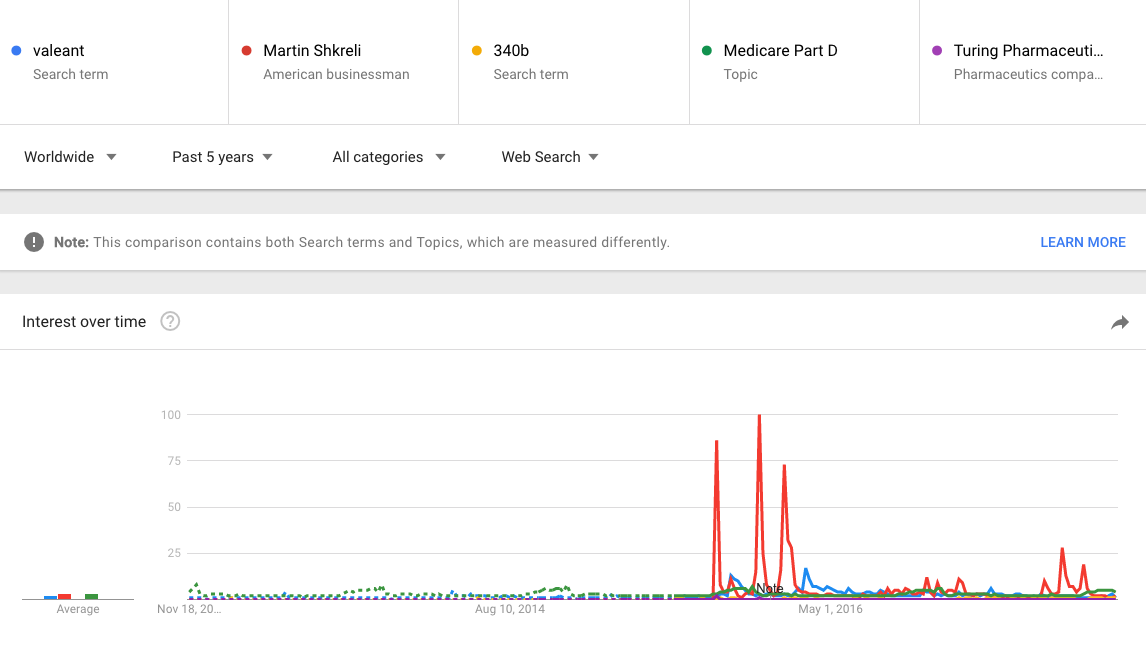 The Positive Takeaways from this Pricing Storm

So what did we learn? I’m not sure, to be honest. This piece of data left me voiceless, and I wanted to share it. It saddens me to think that the incredibly important topic of drug pricing has been brought to light by this individual. Taking a step back, there must be a silver lining here

Tackling Rising Drug Costs in the US: Is ERP an Option? –Rising drug prices in the US are hot topic. Inbeeo takes a look at the recent drug pricing proposal by the Democrats suggesting the use of ERP.

4 Take-Away Messages From The Zolgensma® Pricing Storm – We review the $2.15 million Zolgensma price tag and though analysis of treatment costs for sever chronic disease try to see if the backlash around this price tag was was a storm in a teacup or a tropical cyclone

Six Drugs that Cost a Medicare Part D Beneficiary more than $10,000 Year – Inbeeo investigates how much could the maximum financial burden for a patient be in one year and for one single medicine within Medicare Part D?