Many market access decisions were intended to provide rapid one-off answers to one of the most extraordinary situations healthcare systems have ever had to face, but some of them are telling us something about the more profound changes that are likely to affect pharmaceutical market access in the longer run.

With the multiplication of lockdown measures and the incredibly challenging times faced by healthcare systems, HTA and payer organizations across the world have been surprisingly agile in challenging their ways of working and making key decisions in a matter of days. Throughout the pandemic, Inbeeo has been maintaining an interactive dashboard summarizing the impact of COVID-19 on HTA, reimbursement and pricing decisions. Fortunately, there is less and less to report as most jurisdictions are returning to some form of ‘business as usual’. Inbeeo’s COVID-19 dashboard round-up is available on our website. Here are some of the most striking decisions that were made during that extraordinary period:

If most of these decisions were intended to provide rapid one-off answers to one of the most extraordinary situations healthcare systems have ever had to face, I believe some of them are telling us something about the more profound changes that are likely to affect pharmaceutical market access in the longer run 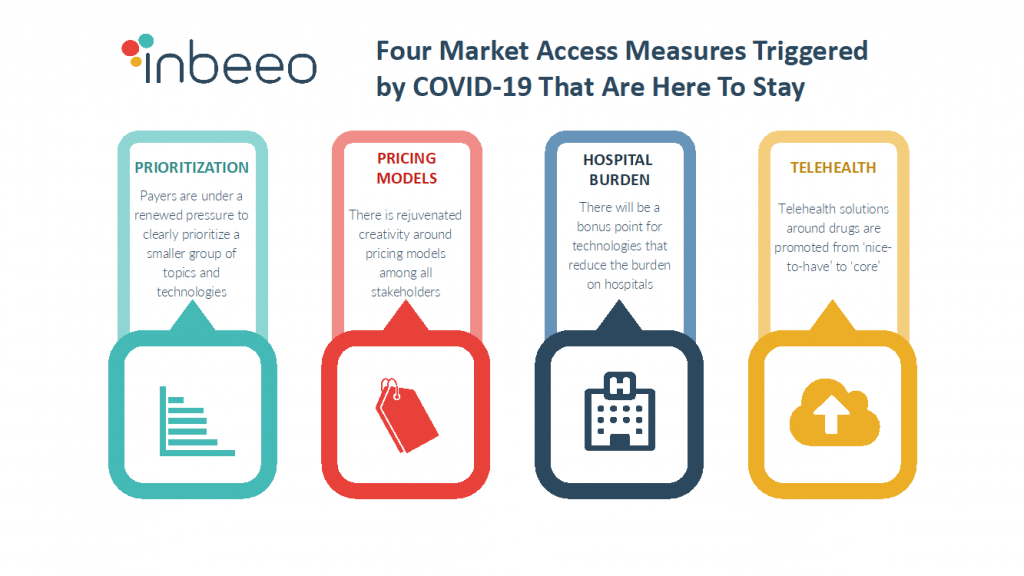 HTA and reimbursement bodies have their own priorities. We’ve known this for a while, even if they are not always formally established and communicated. And to pharma’s greatest despair, these priorities don’t always match those of manufacturers. With the COVID-19 outbreak, the need to prioritize some topics over others became vital. And in the post-pandemic world, the backlog created by deprioritized topics, coupled with the timebomb created by the millions of skipped treatments and procedures, will certainly put payers under a renewed pressure to clearly prioritize a smaller group of topics and technologies.

In fact, this trend precedes the pandemic. France’s HAS announced at the beginning of the year that it would redirect its resources towards the assessment of ‘high impact’ therapies. In the UK, NICE’s revamped ‘Highly Specialised Technology’ category of products with increased cost-effectiveness thresholds has created a new pathway for innovation-packed technologies in areas of high unmet need. In the US, ICER has published a revised framework to value curative therapies.

COVID-19’s acceleration of this trend means routes to market access will more than ever continue to diverge between products that bring a step-change in areas of high unmet needs and others.

The drug pricing debate is not new. The recent waves generated by Gilead’s announcement of remdesivir price to be set at $3,120 for a 5-day course are mere ripples compared to landmark drug pricing tsunamis triggered by Turin’s Daraprim or Mylan’s EpiPen. But what is more interesting here is the rejuvenated creativity around pricing models across all stakeholders, from governments to payers to manufacturers. Here are some of the most interesting pricing concepts that have made it back to the spotlight (yes, none of them are actually new)

The current pandemic has reminded all healthcare observers that pharmaceuticals are the strangest of all goods – goods that affect health. Manufacturers who believe they can price their products based solely on market forces are deeply mistaken.

Let’s face it, the current pandemic has just laid bare the structural issues that have been growing within hospital systems for decades. Years of rationalization and budgetary cuts under the dual effect of market forces (US) and government policies (Europe) have left us with a system that is not ready to face any increase in care demand. We have witnessed how payers were keen to protect hospitals by allowing some aspects of usual hospital care to be administered in an outpatient setting. In Belgium, one of the countries affected most severely by the pandemic, national payer INAMI allowed for erythropoietin and IV iron to be used in an outpatient setting to reduce the number of transfusions in the treatment of anemia.

Long before the pandemic, payers have expressed growing concerns over the extra burden that newer health technologies might put onto hospitals. CAR-Ts are a high-profile example of these technologies for which multiple payers have mandated the manufacturers to chip in when the hospital bill comes.

Pharmaceutical manufacturers must reflect on how their new products can reduce the workload of public and private hospitals by prioritizing less invasive and less resource-hungry treatment administration.

Telemedicine on the rise. Once again

An overnight revolution, one hundred years in the making. From the first telephone consultations dating back to the early 20th century to the use of France’s Minitel in the 80s, telemedicine was, for a very long time, an unrealized promise. Over the last few years, we witnessed payers and HTA becoming increasingly intrigued by the value that can be unlocked from what is now called telehealth. So, when back in April this year, France’s HAS announced the full reimbursement of telehealth consultations, the first question that came to mind was – were they not reimbursed before? They were, in some cases, but only since 2019.

As a matter of fact, the reimbursement of telehealth has been uneven. The reasons for this slow adoption are complex. They might relate to payers’ fears of a sudden increase in healthcare demand induced by the ‘I can speak to my Doctor from the comfort of my couch’ effect. The pandemic is most likely helping them realize that the indirect benefits of telehealth dwarf the direct costs.

Just like payers, pharma companies have demonstrated varying levels of appetite when it comes to telehealth. Apart from those involved in chronic cardiovascular and metabolic disorders for which telehealth is in the patient care DNA, telehealth has often been considered as a ‘nice to have’ (have you ever attended a workshop on beyond-around-besides-before-adjacent to- the pill?)

In the post-pandemic world, pharma might have to rethink the importance of telehealth as something that is core to its offering.

The common trait of these 4 emergency measures likely to become longer-term trends is that they precede the inception of the pandemic. It is hard to find any positive aspect coming out of this healthcare crisis. However, all of these 4 trends can bring significant value to patients. And if the pandemic can act as a catalyst for change in the otherwise slow-moving world of market access, this is where we might find a silver lining.